Whether you’re a fisherman, a boater, or just someone who likes to be on the water, the tides will affect when and where you can travel. What exactly causes tides? Most of us probably know it involves the moon, but is there more to it?

The moon’s gravity doesn’t only affect objects on its own surface; the moon generates enough gravitational pull to affect the Earth, which is approximately 238,900 miles away.  Most importantly, the moon’s gravity creates tidal force. As the moon’s gravity pulls the Earth towards it, the Earth’s waters bulge out towards the moon. Water is more fluid than land, so the oceans are more dramatically affected than the ground; however, even rocks and mountains experience slight “tides” caused by the moon. Click here for a short video about tides if you’d like to learn more.

Let’s look at the picture below for an example of what causes a high tide. If the moon is on the east side of the Earth, this results in a high tide in the eastern hemisphere. Then, the northern and southern points of the Earth experience a low tide. 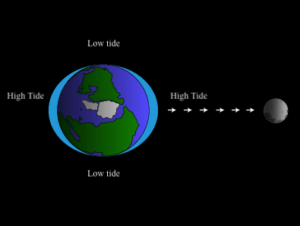 Why do we experience two high tides in one day?

If you look closely at the image above it seems to display a contradictory idea. In the picture, when the moon is on the east side of the Earth, not only does the east side of the Earth experience a high tide, but so does the west side. Having a high tide on the right makes sense because it is closest to the moon and therefore experiences the most force, but what about the left side?

The left side actually experiences a high tide due to centrifugal force. Without diving into too much physics, centrifugal force is the outward force felt when an object moves in a circle. This might seem a little confusing, but there are some real life examples where we can experience this force first hand. Think of being on a merry-go-round, or on a teacup ride at an amusement park, or even on the “Round-Up” carnival ride. In all of these instances, when you rapidly spin in a circular motion, your body will feel pulled away from the center of rotation and towards the outside. This is centrifugal force.

On the diagram above, the moon’s gravitational pull is the weakest on the left side of the Earth, but the Earth is still spinning around its axis and generating powerful centrifugal force. If you can feel this force on a merry-go-round going 10 mph, imagine how strong it is as the Earth spins circularly at 1000 mph. The “round-up” carnival ride hardly reaches 100mph, and it’s impossible to peel your body off of the wall!

Centrifugal force forces the water to bulge out and form a high tide, and this explains why we experience two high tides and two low tides every 24 hours. 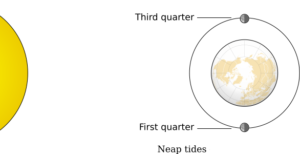 The sun also plays a role in tidal change. The sun is so massive that even though it’s 94,216,000 miles from the Earth, it’s gravitational force still affects the Earth. (Being so far away, however,  the sun does not generate nearly as much gravitational force as the moon.) When the Earth lines up with the sun and the moon during full moons and new moons, the sun’s and moon’s gravitational pulls work together. This double pull results in extreme high and low tides. These extreme tides are called spring tides (See image above on the left).

When the pull of the sun and the moon work perpendicularly on each other (as seen in the image above on the right), during half-full moons, we have neap tides, which means there is a smaller fluctuation or swell between low and high tides.

If you get the chance, check out the moon’s phases and try to catch a spring tide out on the water. Fishing is especially good, and you can travel much further into the salt marshes.