Crystal River is known for its unique wildlife and picturesque sawgrass prairies. Some wildlife, like manatee, can be safely observed up close, but other wildlife, like gators or snakes, should be observed from a safe distance. Many snakes inhabit the sawgrasses and can swim through water. Some are harmless, but some are deadly. In this post I’ll give you a rundown of the most common venomous snakes in Crystal River and how to avoid getting bitten. 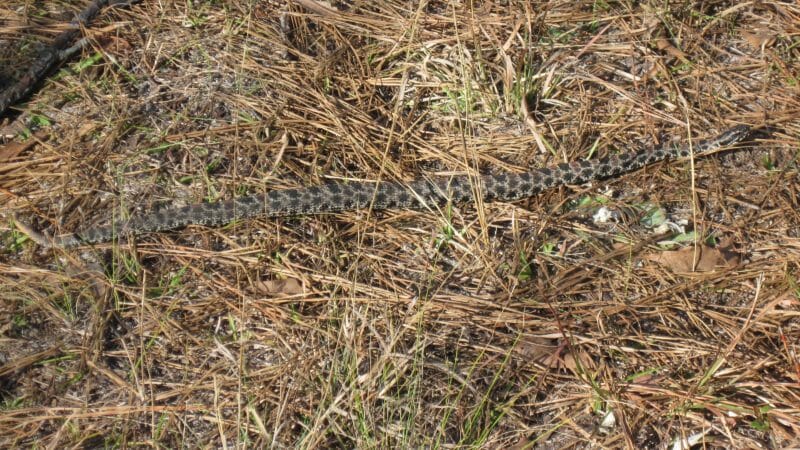 Of the four, the pigmy rattlesnake is by far the most dangerous. They are small, aggressive, and unlike the diamondback rattlesnake, their rattle is quiet and almost unidentifiable. Due to their small size (about 1-2ft.) and excellent camouflage, many people enter the snake’s “strike zone” without even realizing it. (See image above.) Plus, their rattle is quiet, so when the snake attempts to warn an approaching person, it’s almost impossible to hear the rattle. Pigmy rattlesnakes normally have grey bodies with dark grey-black blotches. Sometimes, you’ll be able to see a reddish orange stripe running along a pigmy rattlesnake’s backbone. 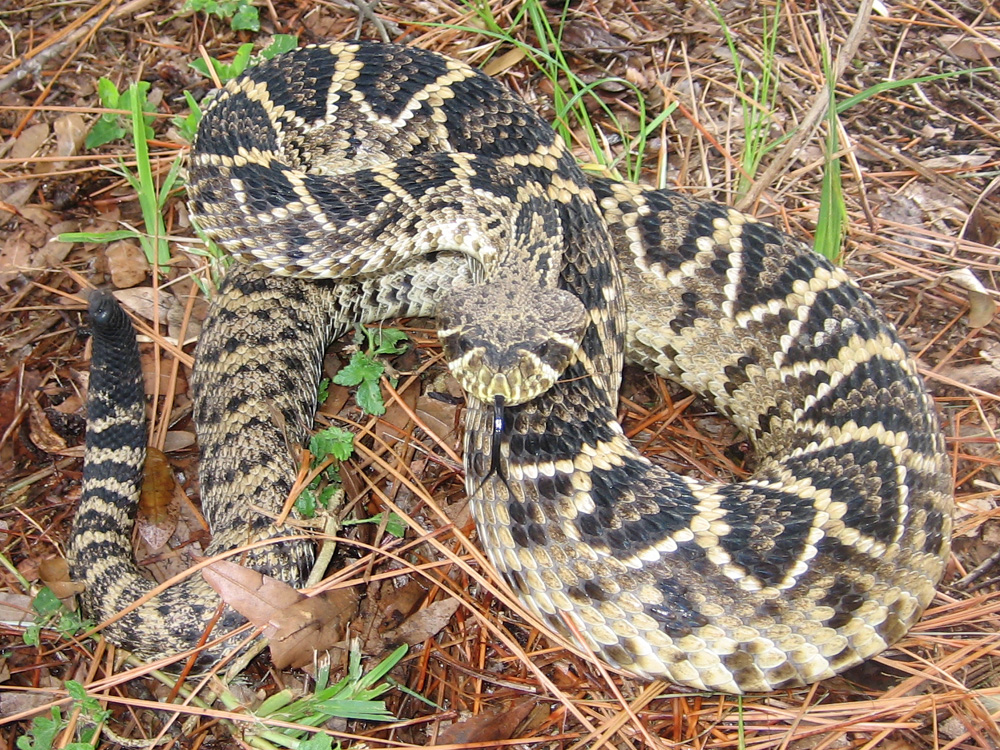 A relative to the pigmy rattlesnake is the diamondback rattlesnake. Diamondbacks are much larger (about 3-6ft.) and less common. Back in the 20th century, people hunted diamondbacks in Florida for their skin to make belts or purses. Scientists would also purchase the snakes to make anti-venom. According to Tom Palmer, an environmental writer, some estimate that only 3% of the original population of rattlesnakes remain in Florida.

Diamondbacks are very easy to spot due to the diamond shaped patterning down their backs (hence the name “diamondback”). Unlike the pigmy rattlesnake, the diamondback has a loud and distinctive sounding rattle (Click here to listen to the rattle). Another feature to notice about the diamondback is that it has a triangular head. Triangular heads often indicate a snake as venomous. While this is not always the case, it’s always better to be safe than sorry. 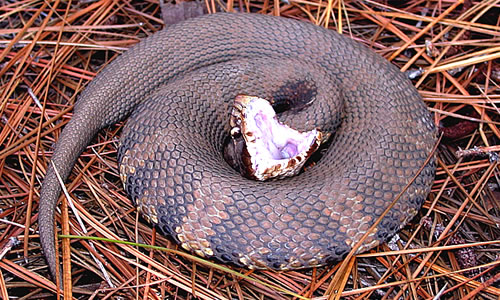 The most common venomous snake in Crystal River is the cottonmouth, which gets its name from the white color inside the snake’s mouth (it exposes its mouth when it bares its fangs). Another name for the cottonmouth is the water moccasin. Many believe the nick-name came from the way the snake silently glides through bushes and grasses, like someone who is wearing moccasins.

Cottonmouths grow to about 4 feet and are identifiable by their triangular head and their thick bodies of black or brown coloration (they have little patterning). Cottonmouths can swim extremely well and are often confused with black racers or water snakes, which might bite but are non-venomous. The reason cottonmouths have an ominous reputation is because they are known to hold their ground when confronted. Other snakes, like water snakes or black racers, typically flee from a larger animal. 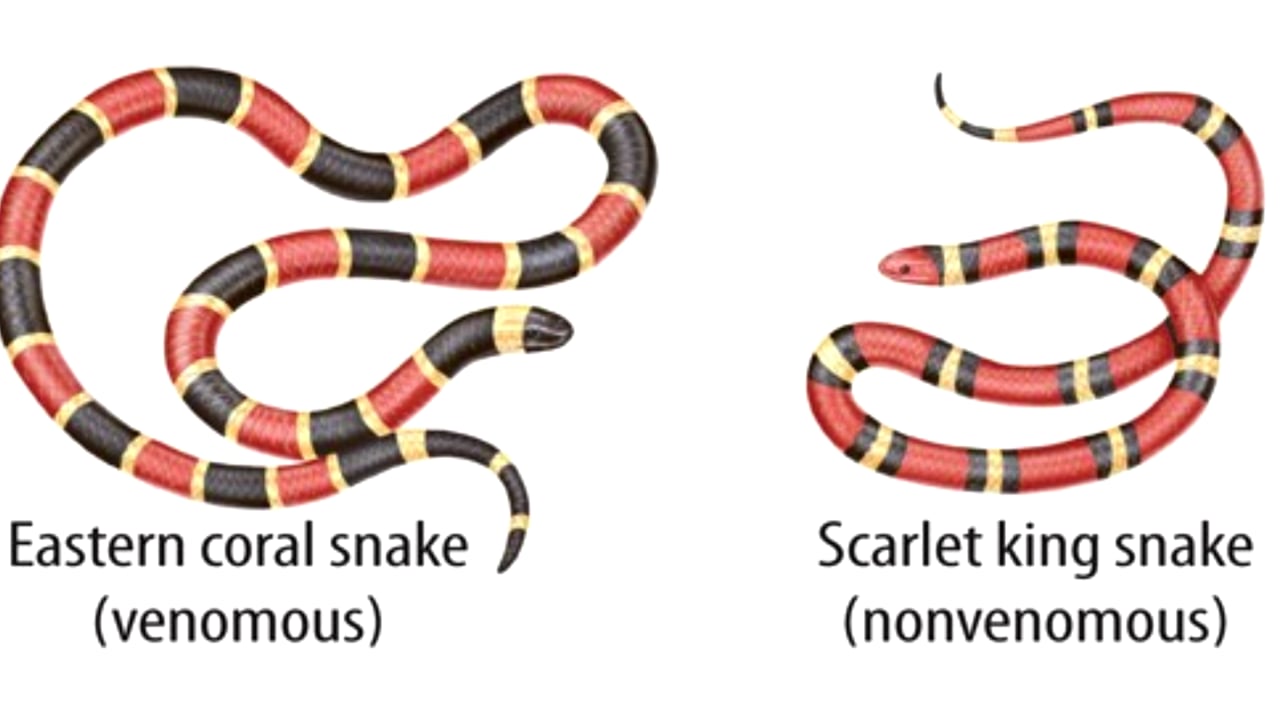 The last common venomous snake in the Crystal River area is the Coral Snake. These snakes are easily identifiable by their distinct red and yellow bars. Coral Snakes are often confused with the nonvenomous King Snake due their similar color patterning (see images above). To avoid making a dangerous mistake, learn this simple rhyme: “Red on black, safe for Jack. Red on yellow, kill a fellow.”

While snakes can be intimidating, they help the ecosystem by maintaining a balanced food web. If a snake become a dangerous nuisance, it’s best to call snake removal services who will relocate the snake. Killing snakes only hurts the ecosystem and allows rodent populations to flourish, which can cause more problems than the snakes themselves.

How to avoid snakes?

All in all, it’s best to avoid snakes by staying on cleared paths with high visibility and to never handle snakes without training. Most of the time, snakes feel vibrations in the ground of a much larger approaching human and retreat. If you’re worried though, I always carry a walking stick to probe dense bushes or keep a snake at bay. Strikes mainly occur when people walk off the trail and accidentally enter the snake’s strike zone.

If wild snakes interest you, learn how to determine the dangerous from the harmless. Also when in the woods, carry a cell phone, so if you’re bitten you can call 911 or poison control. While waiting for help, remain as calm as possible and keep you heart above the bite location. Thankfully, herpetologist developed anti-venoms for many snake bites and a quick phone call can be a lifesaver. If bitten make that urgent care call even if you are unsure about the toxicity of the bite.

One final note: If you are bit by a snake, DO NOT attempt to suck out the venom.  Adventure movies contributed to this common misconception, but attempting to suck out venom is ineffective. If it does slightly work, the venom enters another person’s system, causing more harm than good. Venom ingestion allows venom to rapidly travel to vital organs and heightens the chance of cardiac arrest.  For more information on how to treat a snakebite, check out the John Hopkins Website.