Cormorants vs. Anhingas On Crystal River

Cormorants vs. Anhingas On Crystal River 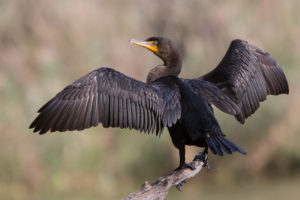 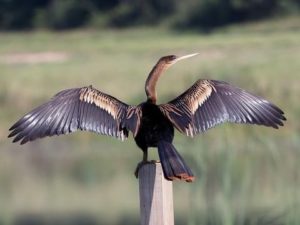 Whenever I paddle with someone visiting Crystal River, they’re bound to have questions about wildlife and the river itself.  Knowing the names and habits of Crystal River wildlife and the history of the river’s “old Florida” landscape, helps all of us appreciate and care more about our natural heritage.  Through these posts, I will address some of the questions I have been asked, and some of the questions you may be asked when out on the water with friends and family.

A few days ago, I was paddle boarding in front of Pete’s Pier with my college roommate, Kevin. While Save Crystal River has done no work at the pier yet, you can clearly see the downstream effects of their pilot project. Eelgrass has spread, and the water has become much clearer. In fact, it’s clearer than I’ve ever seen it. Fish, crabs, manatee, and healthy eelgrass now visibly populate the area.

Kevin pointed at a water bird standing on a dock with its wings spread open to the sun.  He was curious about this medium sized, dark-colored bird. You have seen these birds on dock poles or idle speed signs, but what exactly are they? I grew up hearing them called cormorants or anhingas, but I never knew the difference between them. Were they the same bird? Were they a different species? Well, here’s the scoop: 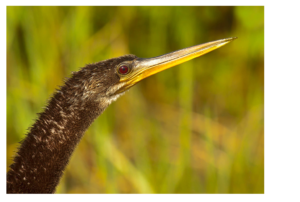 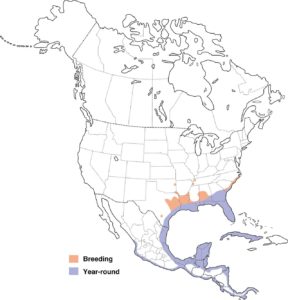 In short, the anhinga and the cormorant are two very different kinds of birds. While their looks are quite similar, their hunting styles, beaks, and their ability to survive in different geographic locations are very different.

The word anhinga derives from a Brazilian language, which translates into English as “devil bird” or “snake bird.” They earned this name for their long neck and the way they slither through water. Some people even say anhingas look like miniature Loch Ness Monsters!

Oddly enough, anhingas do not have waterproof feathers, which might seem like a disadvantage, but in reality it helps the birds slowly submerge their bodies underwater to stealthily hunt fish. Anhingas hunt by using their spear-like beaks to pierce small to medium sized fish and crustaceans. Their bodies are brown and black, and they have dark beaks.

Anhingas mainly live along the coast in the southern part of the United States, and they can be found as far south as Argentina. After a successful hunt or a long day, anhingas rest on docks or pilings with their wings spread, letting the sun dry out their waterlogged feathers. Once their wings are dry, they can easily fly to their next hunting location or nest. 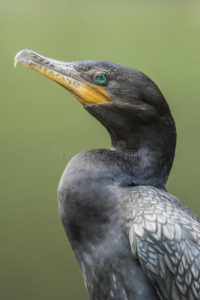 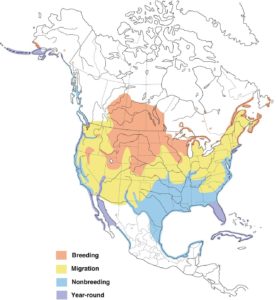 Cormorants look very similar to anhingas except cormorants have black bodies with bright orange beaks. If you’re lucky, and can get close to a cormorant, take a look at their eyes. The double-crested cormorant, the cormorant found in Florida, has bright cyan eyes. From further away, however, the most telling feature that identifies a cormorant is its hooked beak. Unlike the anhinga, the cormorant uses its beak to grab its prey underwater rather than spear it.

Much like the anhinga, cormorants have a diet of small to medium sized fish, and they prefer prey that is easier to catch. People often confuse cormorants and anhingas because both birds dry their wings out in the sun. Unlike most waterbirds, like ducks, cormorants and anhingas have less preen oil on their feathers. This means their feathers get waterlogged and heavy. In order to fly effectively, they need their wings to dry out.

Cormorants can be found more north than anhingas and more inland. If you look at the maps above, they show where cormorants and anhingas live in the United States. As you can see, there is overlap, but anhingas are generally found more south than the cormorants, which are found in more northern parts of the US.

Next time you’re out on the water, don’t let your friends or family members stump you with a wildlife question. You’ve now got the anhinga and the cormorant down, but what’s next? Feel free to ask me any specific questions you might have at walkeronthewater21@gmail.com, and I’ll be happy to write a post about it.

Anhinga with Wings Spread: All About Birds

Anhinga Map: All About Birds

Cormorant Map: All About Birds